I wrote this flash fiction a while ago and it appeared in The Fieldstone Review which is the University of Saskatoon publication.

Calvin Harrison turned down the dirt road and braked.  He listened to the throb of the big diesel and sighed.   He was going to miss his new truck. It made him feel like someone else—not the friendly neighbourhood pharmacist, not the hen-pecked husband and definitely not the doting father.  Someone you saw in commercials—a little taller and straighter.  Someone with flinty blue eyes, whose tight Wranglers bulged a little bigger.

He didn’t mind the doting father image.  He and Natalie had had one of those perfect relationships where they laughed at each other’s jokes and knew what the other was thinking.  He’d spoiled her and if he had it to do again, he’d spoil her worse.  No regrets.

Pale light fingered the horizon and touched the clouds that had gathered to greet the sun with pink gold.  Mim would have a name for the colour, something from the new palette of paints at Home Depot.  Pink Desire, Reef Rose, Peach Parfait, Pink Abalone.  Mim—so tied in to things that didn’t matter.  She’d be happy choosing the new colour for the walls and happy while she squabbled with the painters.  Almost before the paint dried, she’d start getting restless again.  It was the same with her hair.  Cal had loved her shiny blonde mane.  She could have modeled for l’Oreal or Clairol.  God knows she used enough of their products over the years.  He never knew what the tint of the week would be.  Wild Irish Red, Mahogany Fire, Ebony Ice.  Then there was the chunking and streaking.  Mim said no one had a natural hair colour any more.  When Cal tried to summon up the shade her hair had been when he met her, he couldn’t.  He was living with a stranger.  Sometimes he watched her when she wasn’t looking and by narrowing his eyes and squinting tried to conjure the image of the girl he had married.  Occasionally, he thought he caught a fleeting resemblance.

The horizon burned gold fire now where the sun began its shallow ascent into the fall sky.  The clouds radiated gilt light.  The air was still.

It was as good a day as any, Calvin thought.

He would have liked to take Mollie for a last walk but it wouldn’t have been fair to the little mongrel. He couldn’t leave her in the truck even though someone would find her…just like they were going to find him.

Light raced across the hilltops, casting the hollows into shadow and outlining the dark limbs of aspen trees with tinsel trim.  Time was getting short.  His father used to say, no time like the present.  Already the siren of lethargy threatened to mire him in inaction

He lifted the shotgun from the truck seat.  Its double barrel glinted in the early light and the handle felt cold.  The acrid scent of gun oil hung in the air and there was a sharp snap as Cal broke the gun to load it.  He slid two magnum shells into place and there was a quiet snick as he closed the breech.  Magnums…he would only need the first one but he didn’t want any mistakes.

He tried not to think about Jim Craddock who botched the job and actually needed the second shell.  He must have lost his nerve at the last minute and only his jaw had been blown away. He’d staggered around his game room splattering blood and howling in outrage.   Then he finished what he had started.

Cal killed the truck’s engine.  He wasn’t about to destroy the interior.  Maybe Mim would get a decent price for it after…even with its unfortunate history.  He climbed out and closed the door quietly.  No need to slam it; the truck wasn’t yet a year old.  A breeze sprang up and carried the spicy fall air up the hill to Cal.  When he looked out across the valley, he saw a doe standing next to a stand of willows.  She had seen him and was testing the air cautiously but it was another month until hunting season opened and she was more curious than scared. He watched her for a minute.  A yearling stepped into the clearing and Cal could see it was sleek and healthy.

When he started down the slope the white-tails turned to step delicately into the bushes.  Cal headed west.  There was a small lake…the locals called it Schubert’s after an early settler—and at this time of the morning, the bright yellow leaves of the poplars would reflect perfectly from its cobalt depths.  Those same poplars protected it from errant puffs of air and it made a picture perfect enough for a calendar.

Cal stood for a couple of minutes.  Maybe if things were different between him and his wife…… but they weren’t.  Maybe if Tallie…but he couldn’t think of her; he just couldn’t.

Minutes later the shot gun blast sent the doe and yearling deeper into the bush, their white flags flashing once as they disappeared.  On the hilltop, Cal’s Dodge waited in splendor, silhouetted against a cerulean sky that promised early snow.

The silence was absolute.  Then the breeze brushed dried grass blades against each other.  Aspen leaves like gold foil coins rattled in the bushes.  A crow flew up and landed at the top of a tree, cawing raucously.

Cal emerged from the western woods.  He was a dark shadow against their colour and it was him the crow was scolding.  He held the shotgun gingerly and broke it to remove the remaining shell.

“Damn it, shut up,” he muttered.  The crow cocked its head as though listening.  “It’s just not a good day to die.” 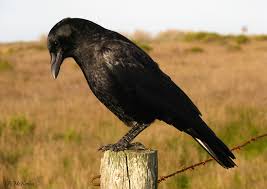 It's time to update the blog and its look. View all posts by Linda