The sun had set but its slanting rays still cast an eerie light throwing the trees along the road into twisted shadows. Drew steered them deftly along the winding trail.

“I don’t know why you insist on hanging with Keven. He’s so weird.”

“Keven’s okay. He owns a start-up IT company and it’s so successful, he’s thinking of going public.”

It was hard to take Drew seriously, dressed as he was in the cheesy devil costume. The cheap plastic mask was perched atop his head and she knew they wouldn’t make an entrance as the sexy couple they were.

“There now, see that,” he said, as they rounded a final curve.

It was hard to argue. The “cabin”, a large log structure, dominated by spruce trees and alight with Jack-o-lanterns did look like the perfect setting for a Hallowe’en Party…if only the storm stayed away. Ominous, dark clouds could be seen to the left of the cabin, across the lake. Kaitlyn thought she saw lightening but that made no sense…it was October 31st. 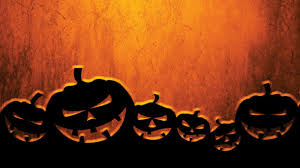 Before she could mention it to Drew, he had stopped the car, jumped out and was looking for the booze in the trunk. On the deck, she could see Keven, in a Grim Reaper outfit. Kaitlyn had to admit it suited him with his tall, gangly build and spidery arms and legs. The black shroud swirled around him in the breeze and the loose hood hid his face. He supported an authentic-looking scythe against the deck floor and its blade curved away from his head. Around him, a werewolf couple, a vampire and a zombie milled. Various interpretations of monsters had inspired the costumes of the ten or so guests. Some unidentifiable music blared, rap or punk or emo or some wicked combination. Maybe it was banshees wailing.

Kaitlyn shivered and followed Drew onto the deck.

Keven didn’t answer but gestured to an old fashioned Coca-cola cooler with his left hand.

“Perfect,” said Drew, grinning as he deposited the beer and hard lemonades into the ice in the cooler. “Want a raspberry to start, Kaitlyn?” he called over his shoulder. He had already popped the top from a can of Bud for himself.

Without waiting for her answer, he opened the drink and held it out to her. Its sweet pseudo- fruit smell mixed with the malty fug of beer. Across the deck, some guests smoked weed, and its pungent odor wafted in the breeze.

Through the windows, Kaitlyn could see two large candlelit tables, one that was covered with catered food- sushi, crab cakes, smoked salmon, vegan offerings and a variety of vegetables. The second featured chips, dip, Cheezies, nachos, any kind of junk food you could think of. The candlelight gave the food a bloody colour and the flickering shadows cast it into disturbing shapes.

A nasty looking witch came up to Kaitlyn and said, “Whoa, I thought Elvira went out in the 80s.”

Kaitlyn stood with her mouth moving but no sound emerged. She looked down at herself. Sure there was lots of cleavage and the outfit was super tight but she could carry it off. Those hours in the gym were worth it and besides, Drew liked her to look good. She knew she looked good.

Drew came over and she could tell he had chugged a couple of first beers.

“Hey, babe,” he said. “Let’s dance,” and he started to contort without rhythm.

Kaitlyn didn’t argue. She loved to dance and it was a chance to show-off her Elvira look. Soon she and Keven had the deck to themselves. Kaitlyn couldn’t contain a smug smile. Then she heard the thunder over the blasting music. The first rain drops were big and cold. The wind rose sending gusts of frigid air churning around the cabin.

Keven grabbed her by the waist and they followed the other stragglers into the cabin.

Lightning split the sky, followed by deafening thunder. The icy temperature of the cabin prompted a chorus of complaint.

“Keven,” a vampire shouted. “Get that fireplace going.” There was no answer.

“Turn on some heat.” This from a witch.

There was more carping and moaning. Their host was didn’t hear it because he couldn’t be found.

Kaitlyn had goosebumps and was shivering.

“Do something, Drew,” she said.

“Excuse me, look out.” Drew wove through the guests and tables to the fireplace built into a fieldstone feature that extended beyond the wall. It was bright, new and looked unused. Drew bent closer.

“Do you know what you’re doing, Bud?” asked a werewolf. “Don’t want to blow us all to hell. Keven’s got plenty more refreshments.”

Drew fumbled a bit as he looked for the controls which were hidden in a panel on the floor of the fireplace. He hesitated but then, turned the main control. Nothing happened. He tried a couple more times with the same result. Shouted advice from the guests didn’t help.

“Oh, for f___’s sake.” The werewolf pushed Drew out of the way and after a flourish, he turned the control to ON.

A huge ball of burning methane exploded into the costumed crowd. The werewolf combusted in a spontaneous flash. Drew screamed as his plastic mask melted onto his face. Kaitlyn’s Elvira gown dissolved and burst into flame. The unholy screams, the roar of the fire, the crashing thunder turned the cabin into a nightmare inferno. The guests cavorted in a final macabre dance as tendons and ligaments contracted spastically. Upstairs hungry flames flickered and licked around Keven’s comatose body.

Outside, a long shadow stretched from the black clad figure watching the conflagration. The only features visible in its hooded face were red eyes, reflecting the fiery destruction before it. Shrouded in black and leaning on his scythe, the Reaper enjoyed his work for a few minutes before turning to melt into the stormy darkness.

It's time to update the blog and its look. View all posts by Linda