It’s happened! The Polar Vortex lasted too long and the temperatures were in the minus thirties for daytime highs. People hunkered down and only those brave souls who had to leave the house for work, did. The pandemic added to the “hardship” because even though outdoor gatherings were allowed, no one wanted to freeze or die of hypothermia.

Then yesterday, the high was -4 Celsius or 25 F. My friend texted and our outdoor coffee was a go! Even though it was overcast and there was a bit of wind, we were deprived of laughs and conversation for too long. “Our table” at the park was available and when it started to snow big fluffy flakes, we just laughed. Now veterans of the outside meet-up, we had thick towels for the bench seat and just cleared snow away for our thermoses. It was as good as I anticipated. Laughs, stories, and settling world problems. In the bushes behind chickadees, chirped, English song sparrows called and a downy woodpecker went about “pecking”, oblivious to us. An hour and half that went by too quickly but added so much to the day. We are social beings and a little snow didn’t matter. When I got home, my husband asked ‘what the gossip was.’ I honestly drew a blank. That’s not what we do on our visits; the talk is wide ranging.

The other great thing about the break in the weather is that the dog walks are without boots and their “coats” are more to keep their bellies warm. Spring is around the corner and I honestly can’t wait.

Stay safe. The days are longer and warmer.

That’s not true. But it is cold, old fashioned high pressure, prairie winter cold. The sun is bright and through the window everything looks inviting; blue shadows on the snow, dark conifers against a pale sky, and car exhaust trailing away like escaping phantoms

It looks inviting but the truth of cliche is proven again. Looks are deceiving; step outside and your nose freezes shut, the chill captures your breath as frosted filigree in your eyelashes, and embellishes the fake fur of your hood. Your cheeks tingle and burn. It’s too cold.

Yet outside the window, chickadees flit and feed, a nuthatch sits on the step, and a blue jay balances on the feeder. Once in a while, a bird finds a perch in the sun and tries to catch some of its illusory warmth. A cat skulks by hoping to find shelter.

In the day, the temperature made no difference to my Dad. The chores had to be done, the cattle fed and watered, and the miscellany of other creatures cared for. He’d hitch the team of horses to the rack and load on the feed. Harness jangling, hooves crunching the snow, the horses would pull him out to the waiting herd. The pink nostrils of the cattle leaked steam into the clear air and their bawls welcomed him. There was no missing a day because of weather.

I’m glad to settle in and watch the polar vortex from my window. If I want to hunker down and read a book, snack a bit of comfort food, or even sip a glass of wine, I can. I’m retired. I don’t have to put my nose out of the door so I won’t complain and I’ll enjoy my indoor activity. It’s February and when this cold breaks, spring won’t be far off. There’ll wiener roasts, outdoor visits, and gardening. The cold won’t last.

Alberta is experiencing late fall weather early with snow, rain, and overcast skies. We could have changed our plan to visit the new addition to the University of Alberta Botanical Gardens, the Aga Khan Garden, but despite the 2 degree Celcius temperature, we didn’t. Two native Albertans and a transplanted Vancouverite are not that easily deterred.

The chill gave us the advantage of being three among very few other visitors. There was a bus of school kids and then it was like we had a private viewing. The Aga Khan Garden is a spectacular 4.8 hectares developed for Edmonton’s region and climate, inspired by Mughal traditions, and made possible by the Aga Khan’s $25 million dollar gift. The Garden has been 10 years in creation and is now open to the public. It is meant as a meeting place; a place to connect with nature, and other humans; it is a symbol of hope, peace and unity.

We thought that the main feature would be the Aga Khan Garden but were surprised at the other elements. First we walked by the Wedding Pavilion, and toward the Patrick Seymour Alpine Garden. At this time of the year, it was a stroll through the woods with squirrels, blue jays and robins. Ponds held huge Canada geese who were quite unperturbed by us going by. 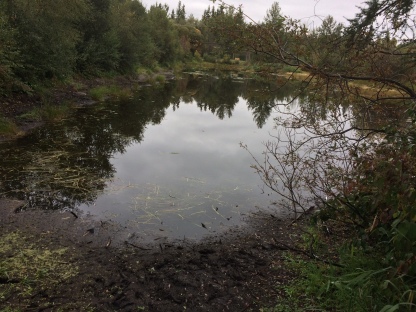 Farther along, we entered the Indigenous Garden which is the only one of its kind in Canada. It features the plants that Indigenous people used for medicine, domestic purposes, and of course, ornamentation. It was too bad that most of the plants were heading to dormancy.

The Kurimoto Japanese Garden is groomed, formal (to me), and designed in the kaiyou (walking style.) There are ornaments, pagodas, and water features. The Garden is named after Dr. Yuichi Kurimoto, the first Japanese national to graduate from the University of Alberta Faculty of Arts in 1930.

After walking through the Japanese Garden, we were excited to come to the Indoor Show Rooms. We chose the Tropical and Bufferfly Room first because we needed to warm up. There were beautiful blooms and as the name says, several types of butterflies fluttering about. 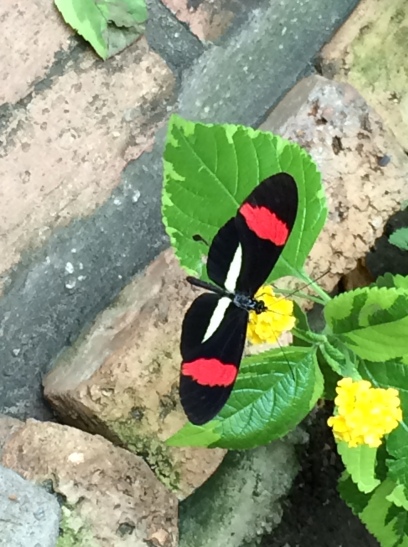 The other two rooms were interesting but not as eye catching. The Arid room held, of course, cacti of many varieties. The Temperate Room had plants we were more familiar with and fewer blooms.

We wanted to have a cup of coffee, and we could have, but hardy as we Albertans are, we said, no, to a cuppa on the patio of the Outdoor Cafe. The heater was on in the car on the drive back.

The day and weather weren’t ideal, but good company, proper jackets, and footwear made it fun. I’m a little embarrassed that although I live so close, I haven’t been to these gardens before. I’ll be back when my “hardiness” is a non-factor and the gardens are in their full glory.

For years now, my husband and I have engaged in futile efforts to attract a humming- bird (or in fantasies) hummingbirds to the yard. There are trees around and every year I try to plant flowers that will attract the illusive little birds. This season it was some scarlet runner beans. They climbed up the metal trellis I put behind them and dutifully produced the red flowers. No hummingbirds.

We have had crows, magpies, and blue jays. They are large enough to escape the small hawks which have taken up residence in our neighbourhood. There were few songbirds because- hawks. They might prey on hummingbirds, we theorized. Despite years of failure, a feeder with a sugar solution (and no red dye to harm anything that showed up) was hung. It’s been a year for the wasps and they had no trouble feeding on the artificial nectar.

I gave up but Gary kept watching and hallelujah one morning, he saw an elusive visitor. He tried not to be disappointed because it was a lone, small hummingbird, a female. It was single and in fragile health he thought. Our hummingbird didn’t hover, but sat to feed. It wasn’t much bigger than the wasps but she wasn’t intimidated by them.

After observing her several times (me, even a couple), and consulting the “bird book” and Mr. Google, we determined that our little green bird was indeed, a female Calliope hummingbird. And here she is. I wish I could say the photo was mine but it isn’t. She is very dainty and soon will be headed south.

Again, thanks to google, I can tell you that she is, weighing about as much as a ping-pong ball, the smallest, long-distance migratory bird in the world. Calliope humming-birds winter in Mexico and then in spring fly up the Pacific Coast. Our little girl is out of her range since we are farther east than this hummingbird species is usually found; Calliope hummingbirds are more likely to summer in BC. Soon she will make her way back along the Rockies to Mexico, a round-trip of 5,000 miles.

Calliopes are feisty little birds and have been seen chasing red-tail hawks. We will be looking anxiously next spring for the return of our little hummingbird. Surely she is not an anomaly; surely she will bring a mate and maybe friends.